One of the common gluten dangers of eating out in Singapore is that just about everything gets at least a small sprinkle of Soy Sauce.
Thunder Tea Rice is different. It is designed to be healthy. No lard, no sauce, no MSG. Just plenty of vegetables, tofu (soft, no gluten skin!), peanuts and ikan billis (dried anchovies). You can ask for it to be made without any of the above if you have nut, fish  or soy allergies too, since everything is prepared separately and put together in a dish to serve. It's a little like Bim Bap if you are familiar with Korean food.
The 'Thunder Tea' component is a concoction of blended green tea, mint and basil leaves with hot water. Some eat it like a soup, which I did at first. Now I have taken to pouring it over the rice so that the whole dish becomes almost like a soup! On the side of course there is soy sauce for the gluten eaters, (glutenators?), and usually a chili sambal which should be checked every time you eat at a new place to make sure it is home made (i.e no thickeners or preservatives that would contain wheat).
One of my favorite things about Thunder Tea Rice is the option for brown rice, which adds to the flavor and touted 'excellent medical and pharmacological values'.
Dish Origins - this is Hakka food with origins in herbal medicine during the Qin dynasty.
No photo this time. I realised that not having the right photo makes me procrastinate in writing this blog so I have decided just to post anyway! Someone else has taken some very nice photos of the Joo Chiat Road store here: http://www.camemberu.com/2009/10/thunder-tea-rice-hakka-lei-cha-fan.html
Posted by Miss Gluten Free Singapore at 7:13 AM 3 comments:

One of the things I miss about home is a cosy place within walking distance to have a lazy Sunday morning brunch. Not least of the problems with this idea being that anything 'cosy' in Singapore makes you want to stick your head in the freezer.

We wandered down to Siglap on one of our first weekends in Singapore while looking for somewhere close by for dinner. Although it turned out to be about half an hour's sweaty walk from home, not exactly next-door, the Next Door Cafe has called me back for an evening drink and dinner a couple of times. The Next Door Cafe has a good-sized cider menu, bonus points, as cider is a favourite of mine, and generally gluten free (Westons, sold by Next Door, is labelled GF). They even have Kopparberg Strawberry and Lime Cider, a twist on the apple or pear varieties of cider that I recently discovered back in Sydney and was disappointed to not be able to bring back with me.

The first time I dragged myself down there to try out their brunch, I was shocked to find they didn't have a breakfast menu. They seemed like the kind of place - good coffee, relaxed cafe vibe, even a book swap shelf. Luckily it was a very lazy Sunday brunch mission and by the time I reached the Next Door Cafe they had opened up the lunch menu. The pesto-chicken salad sounded like a good, and probably healthier, alternative to a cooked breakfast. I wasn't disappointed. At both lunch time and dinner time the chef at Next Door Cafe understood 'gluten free' and was able to guide the wait-staff in helping me navigate the menu. 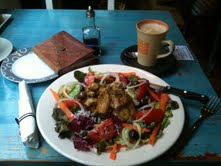 The food at Les Bouchons was good. Simple by Singapore standards, but fresh, and the skill of the Chef showed through. When ordering the salmon, I made sure the fish wasn't cooked in any sauce or crumb and asked for the fries on the side. I checked that the salad dressing contained nothing suspicious. The best way to avoid both gluten and confusion in Singapore is to not expect that restaurant staff know about allergies, let alone gluten, and to simplify things as much as possible.
The high point of the night came when my friend and I decided that we were much too full for desert, but a bit of cheese might just hit the spot. We asked if they had any rice crackers and after going back to the kitchen to check, the waiter came back out and said, 'I'm sorry we don't have any rice crackers, but do you have an allergy?' Impressed, I said 'yes - gluten', and the waiter proceeded to explain that they could put the crackers on the side and that I could eat the fruit.
The second surprise was the size of the cheese platter. Cheese is not cheap in Singapore - especially French cheese served with good wine in a quaint little restaurant with a Parisian feel. When the platter arrived, we thought they must have combined two portions on the one plate. No, it was the platter to share, directly from the menu. 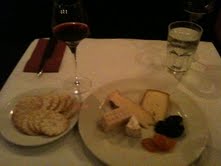 Cheese platter with crackers isolated.
Just when I think I am getting to know Singapore, she surprises me with giant helpings of gluten free cheese.
Les Bouchons is on Ann Siang Road, near Chinatown.
Posted by Miss Gluten Free Singapore at 8:09 AM No comments:

I have been terrible at posting recently, so there is lots to catch up on!

There will be something more substantial coming up soon, but I couldn't resist posting this link to Gluten-Free language cards available online in 51 languages.
http://www.celiactravel.com/cards/
Posted by Miss Gluten Free Singapore at 6:29 PM 1 comment:

As a side trip from Singapore, Vietnam has been at the top of my list of places to go, not least because the idea of eating Pho for breakfast every day was very tempting. We had Ho Chi Minh booked for late March a few months in advance, but at the last minute decided we needed a more chilled out time and booked connecting flights to Da Nang to see the ancient city of Hoi An.

As well as eating Pho at least once per day, (not always for breakfast as we slept in too much for that most days), we discovered some of the local treats that were gluten free. The Hoi An specialty 'White Rose' dumplings - rice flour wrappers with minced pork and shrimp in the center - were something that we ended up trying at nearly every restaurant we visited (that generally amounted to more than three meals a day). Without a doubt, my favorite were at the Banana Leaf Cafe, down by the river, where they also do an amazing Tuna Steamed in Banana Leaf. This is done with tumeric, mung bean noodles and a beutiful blend of spices. The Banana Leaf Cafe is also famous for it's buckets of cocktails - definitely something to share!

After Banana Leaf, The Mango Rooms rated the highest, though it was probably the one place where we didn't go straight for the White Rose dumplings. It was difficult to get past the Green Mango salad with grilled garlic prawns, especially as a fresh change from a diet of mostly rice noodles. Mango Mango and it's sister restaurant The Mango Rooms are at the high end, but with a great atmosphere, and insane flavours, they are well worth a the few extra dollars, and it's still a steal compared with what you would pay in Singapore for a similar standard.

Not everything in Vietnam is gluten free, but rice or mung bean noodles are used in a lot of things. Soy Sauce is not always used in stir frys - do be sure to check though. We found some coeliac cards from this site http://www.celiactravel.com/gluten-free-cards/vietnamese-celiac-card.pdf which were very helpful in a tight spot. However, we only found them on the second day, much too late to print them off, so I wrote them out by hand. After much giggling, the girls in the Banana Leaf Cafe explained to me that it was too much writing, no one wants to read all of that and that all I have to say is the first bit. 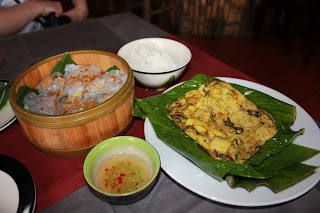 If you need a gluten free bread fix whilst in Singapore, you are far better off cost-wise baking at home than buying frozen from Cold Storage. However, if you are passing through and want something for your travels, Jason's marketplace at Tanglin mall sells frozen Country life bread which defrosts quite nicely. Expect to pay about S$13.50 a loaf. Jason's in City Hall sells frozen rice bread, but this definitely needs toasting and is a typical crumbly rice bread. Not really worth the S$11.50 you will pay.

If you have an oven at your disposal, there are a few mixes to choose from. My favorite is the gluten free easy bake mix by orgran, http://www.orgran.com/products/161/. This is so easy to make, difficult to screw up, involves no messing around with yeast and the wholemeal version has psyllium for that added fibre so often missing from gluten free bread. The Fair Price supermarket at Bedok stocks both the white and the wholegrain versions, along with a huge sample of other orgran products. The end result is you have a fresh, gluten free loaf that you can enjoy in bread form for the first few days before it goes crumbly, and toast after that. No bread maker or kneading necessary, it's as simple as a cupcake packet mix. Depending on the size of your tin, you can get a loaf out of this about 1.5 times that of the frozen lines and for approximately half the price.
Posted by Miss Gluten Free Singapore at 5:42 AM No comments:

I had a baffling experience in little India a while ago, after learning the word 'ata' means 'wheat' in Hindi. Several places in a row assured me that their Naan bread has 'no ata'. Now, I know this is untrue so I went on my way appalled at how people will lie to you to make a buck. A trip to the pure veg Bombay Cafe in Suntec City with a friend from work cleared this up.

Ata is whole wheat. 'Maida' is 'plain white flour'. A lot of people don't seem to question how processed food is made here. Flour is just, well, flour. 'What grain is it made from?', 'no grain, it's just normal, plain flour.' So if they say Naan has no ata they are not lying - they are just not extrapolating. I was also reminded that 'Rava' is Semolina, a type of wheat, so stay away from that too. Bombay Cafe had some delicious new things to try as well as GF curries (we got there in the end), I was introduced to a spiced puffed rice dish called Bhel - delicious and perfect for Singapore as it is prepared and eaten cold. 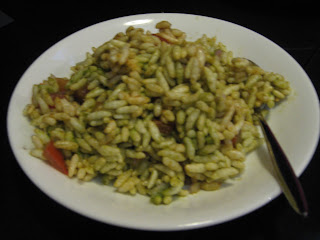